Hello Everyone! We had an interesting discussion in yesterday’s class on Conflict Resolutions and Negotiations. Here are few tips before we start the “walk in the woods.”

The Arab world and the Middle East have a significant impact on world economy since they are the major source of world’s oil supply.

In the situation where we need to deal with a negotiator from the Middle East, there are certain things that we need to keep in mind.

Now, let’s come back to the topic that if we have to negotiate with an Arabic woman we should know about certain cultural practices.

I personally disagree that Arab women are oppressed by men and all of them are veiled. 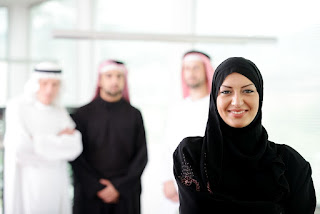 In countries like Lebanon, Syria (before conflict) and Egypt (before Muslim Brotherhood) you could see women in western attire like shorts. However, it is very important as a negotiator to know some basic facts before the meeting starts.

• Respect women. If you are a female negotiator, never make fun of their dress, veil etc. Avoid any dressing, jewelry, and fashion discussion.

• Men have to stand up when a woman enters the room and do not sit till she has taken her seat, even though she is far lower than you in the organizational hierarchy.

• Even in an event of a difficult conversation with a woman, keep your voice low and tone moderate as it will represent politeness and will work in your favor as other male members of the team will highly respect that.

• A male negotiator must not approach a woman for a handshake. A proper way of male- female greeting is male should take his right hand and put on his left side of the chest and bow down a bit. However, if you are a woman, it’s okay to shake hand with another woman.

• Never approach an Arabic woman for traditional two-cheek kiss act of greeting- that’s for men only.

• You cannot socialize with an Arab woman in public like dinner etc. There are different eating areas for men and women.

• Do not initiate conversation with a woman unless she has been introduced by other members of the team, or wait till the formal introduction.

• Do not maintain continues eye contact with a woman during the conversation.

• There are designated prayer times in a day. Do not send meeting requests during the designated “prayer time”, and keep prayer time blocked in your calendar. Also, be prepared for the breaks in a long meeting during prayer times.

• Avoid eating in the cafeteria or public place during the month of Ramadan. Always eat with the right hand only.

• While sitting in a meeting, keep your shoe sole on the ground as a visible shoe sole is considered as an insult.

These cultural practices are not a solid line on the stone. Arabic people are very friendly and they understand that you are not from their culture. Also, they don’t expect you to follow all of these practices; however, knowing cultural practices in advance and be prepared for the negotiations will surely give an extra edge.

Footnote:
Arabic business or a public administration is highly hierarchical in nature and it involves lots of flattering. To break the ice before the conversation, approach a male member of the team and ask about his watch. Wow! That’s a nice watch; may I ask from where you got it? And wait for his reactions; be patient and listen to all the features of his Swiss watch. (99% it will be an expensive watch) – You just made him a friend! And friendship has a core value in Arabic culture and honor must be defended at any cost. Such simple act might help you a lot in the negotiation process.

I have written this based on my knowledge, business interaction, and previous readings. Any feedback, correction, and new learning are welcome.

“traveling- it gives you home in thousand strange places, then leaves you as a stranger in your own land” ― Ibn Battuta (1314 AD-1369AD)